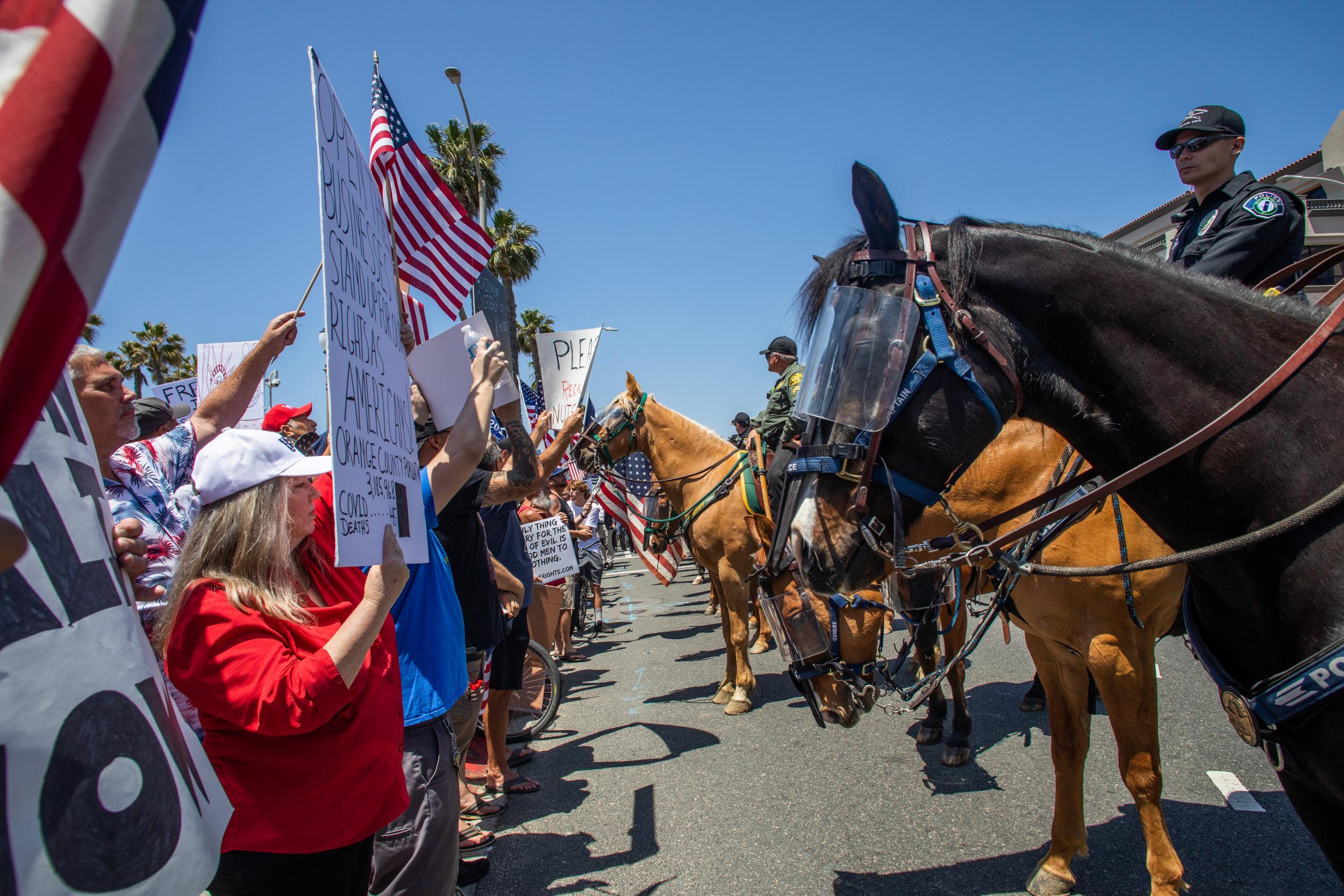 Large crowds of protesters gathered in Huntington Beach in Southern California to protest Governor Gavin Newsom’s stay-at-home order and the closure of the beaches to stem the spread of the coronavirus.

Governor Newsom ordered state and local beaches closed in Orange County on Friday morning after last weekend’s scenes of crowds flocking to the sand and surf in defiance of California’s lockdown rules.

Police estimate that between 2,500 and 3,000 people gathered near the popular pier in Huntington Beach on Friday to protest the decision, chanting, holding signs and waving flags — some in support of President Donald Trump.

Sharing the full story, not just the headlines

The governor called the beach closures a “temporary pause” and said that they may reopen very soon provided officials “can get some framework and guidelines to get this right.”

In response, the city council of Huntington Beach has voted to mount a legal challenge against Governor Newsom, and the city of Dana Point is pursuing a temporary restraining order against both the governor and the state.

Orange County officials blamed “misleading photographs” for influencing the governor’s actions, arguing that a telephoto lens made the beaches look more crowded than they were.

Mayor Lyn Semeta feels that constitutionally the governor has overreached and described the governor’s decision as “jarring,” adding: “This is Surf City. Our identity is very much tied up in our beaches.”

She continued: “Given that Orange County has among the lowest per-capita Covid-19 death rates in California, the action by the state prioritises politics over data, in direct contradiction of the Governor’s stated goal to allow science and facts to guide our response to this horrible global pandemic.”

On Friday, Governor Newsom continued to urge people to stay home, reminding Californians that the “only thing that is assured to advance the spread of the virus is thousands of people congregating together, not practicing social distancing or physical distancing.”

He added that restrictions may be easing soon: “If we have the kind of weekend that I hope and expect we will, where we don’t see those huge crowds descend, then we’re going to be in a position as early as Monday or Tuesday to make some announcements.”

Previous The Best Movies and TV Shows Coming to Netflix, Amazon and More in May
Next JK Rowling donates £1m to charity on Battle of Hogwarts anniversary